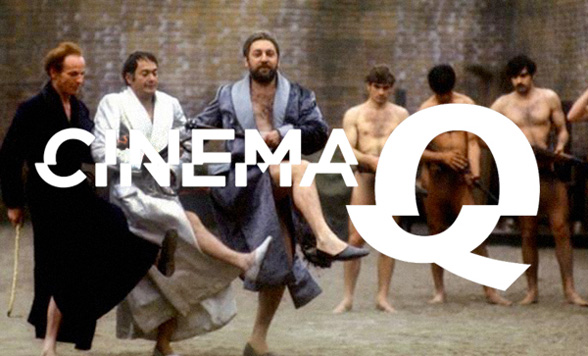 Cinema Quartair, a program of underground, freakish and confusing films, which you will not easily find in regular cinemas. From abstract films to extremeexploitation films. Once a month we explore this almost forbidden cinematography with guaranteed disruptive effect. (All programs are in English)

Why Salò…?
Pier Paolo Pasolini’s infamous last film, Salò or The 120 Days of Sodom, has been criticized as nauseating, shocking, depraved and pornographic. But it is also a masterpiece, for those who can stomach it. Controversial poet, novelist and filmmaker Pier Paolo Pasolini’s transposed this 18th century book by the libertine Marquis de Sade, to fascist Italy in 1944, full of torture and sadism, it nevertheless remains a bold examination of the political, social and sexual dynamics of the world we live in.

Introduction by Amir Vodka: “Sade My Neighbor.” – Pasolini’s Sade according to Pierre Klossowski.

Guest speaker – Manuel Beltrán: “Fascism, Violence and Media” – An overview on the form and perception from 1975-2017

Manuel Beltrán (ESP/NL) is an artist, activist and researcher. His artworks have been shown in museums and galleries Netherlands, Spain, Turkey, Germany, Serbia, Italy, Austria and Poland. He researches contemporary art, activism, social movements, post-digital culture and new media. As an activist, he was involved in the Indignados movement in Spain, the Gezi Park protests in Turkey, and various forms of independent activism and cyberactivism in Europe and beyond. In 2012 he co-founded the art collective Plastic Crowds. Since 2013 he has been head and co-founder of the nomadic school and artistic organization Alternative Learning Tank. He also founded the Institute of Human Obsolescence in 2015. Beltrán lives and works in The Hague.

Pay what you want!

Cinema Quartair is a collaboration between Quartair and Amir Vodka