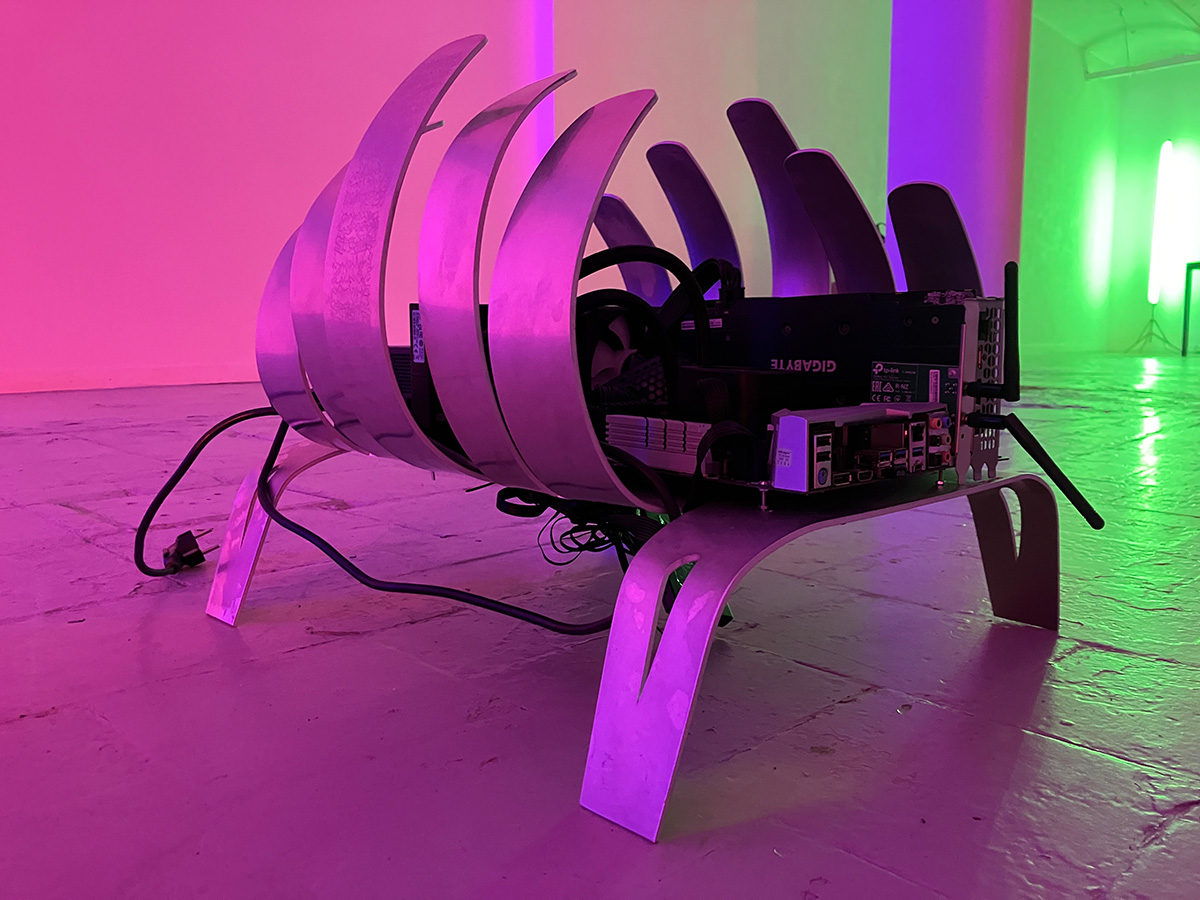 “Garden of Aether” is a simulation artwork that combines 3D aesthetics, game engine mechanics, and sounds by Slagwerk Den Haag to create a conceptual narrative dealing with sustainability and reflecting on the invisible infrastructures that fuel the digital environments.

Adam intended to create a new kind of moving image, one that will be ever-changing and never the same, but also keeps moving image structure and has a beginning and end. The medium of a computer simulation is about giving up control and actively becoming an observer. The confined digital landscape and the physical hardware give the viewer a unique perspective that draws analogies from the world around them. The mechanics of the simulation are inspired by the Anthropocene. As long as the characters keep producing sculptures and altering the natural environment, the temperature will keep on rising. Unfortunately, that’s exactly what the characters are programmed to do.
The sculptures that the NPCs build are not only visual, but each one also contains a sonic element designed by Frank Bink, a member of SDH. These sonic elements populate the landscape and are accurately delivered to the viewer using a quadraphonic speaker setup. Each new sculpture introduces a new sample, creating a cacophony of three-dimensional sounds. The landscape then becomes both visually and sonically saturated.

The project is developed in Unreal Engine 5. The 3D assets have been created using VR sculpting, Blender, and Substance Painter. The hardware is placed within a custom-built PC case, which has been laser-cut from an aluminum sheet and then bent into the shape of a rib cage.

Centko is a lens-based artist observing the intricate workings of our ecosystem. Specifically zooming in on the role of technology in the nature as a whole, Adam believes that the relationship between nature and tech isn’t binary, but rather that even the most advanced human feats are just extension of nature. He strives to shine light on this connection using various media such as video and 3D animation. The artist is currently supported by the Stimuleringsfonds Talent Development Grant. Adam Centko thanks the support of Trang Ha, Carmen Roca Igual, Laimonas Zakas and Mike Rijnierse at Quartair, October 13th, 2022.