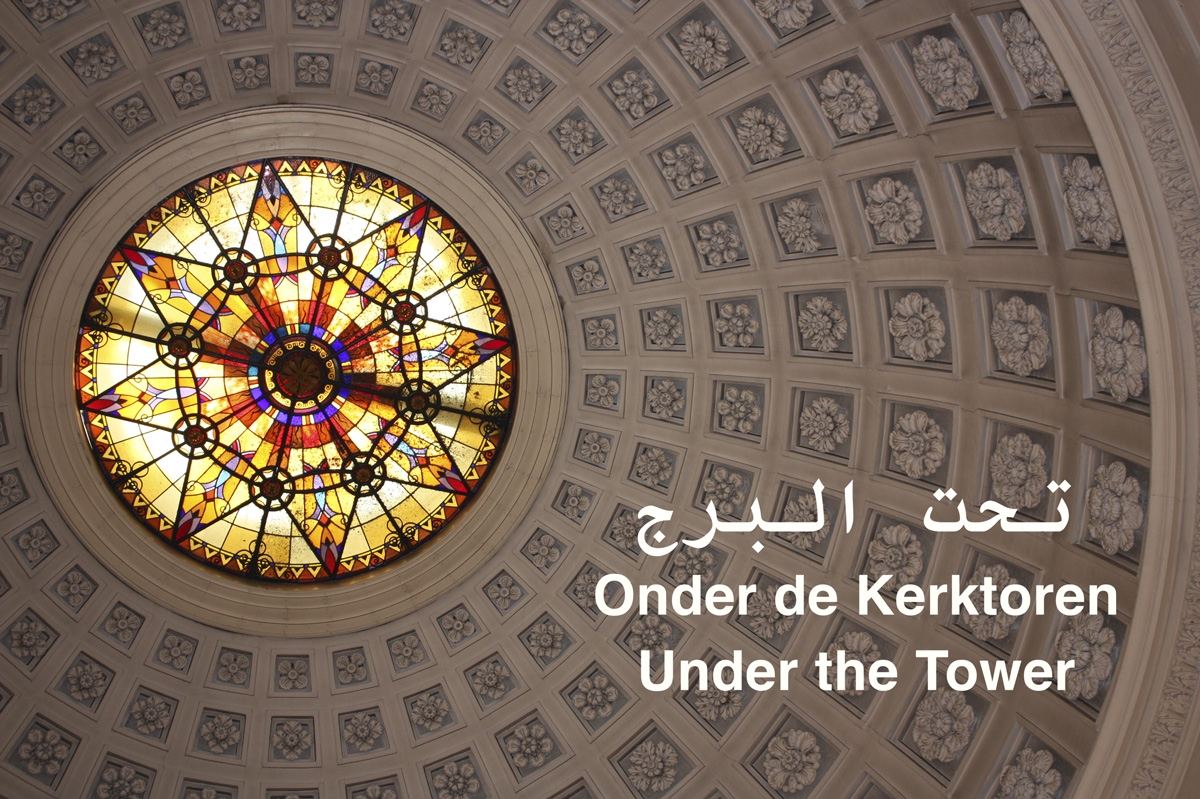 ‘Onder de Kerktoren (Under the church tower)’ is a typical Flemish expression that means “small-scale” or “navel-gazing”. Universality and open-mindedness sit at the opposite end of the spectrum. These two extremes are diametrically opposed to one another. The concepts of local and global have a new ring to them. Western European citizens have experienced the reality of lockdowns for the first time since the Second World War. We were confronted, quite literally, with the perspective of our current location. How do we see things from such a position? Is there a difference between the digital and the physical experience?

Ilona Senghore – “I am getting a cold and think I am infected. On the day that the Netherlands locks down, the norovirus reigns in my department. In the event of an outbreak, the nursing staff continues to work with the appropriate measures. Other disciplines do not come to the ward in order to limit further spread in the nursing home. I belong to the group of well-being counselors and work in a ward with 32 residents with dementia, half of whom are relatively young. Fortunately, after a week, the norovirus is gone. Unfortunately, the Coronavirus is spreading further across the Netherlands and is breaking out in nursing homes as well.

“It is very quiet on the street. I cycle through the quiet streets sobbing to work because I feel strongly that I am a source of contamination and the last thing I want is to infect the residents. The use of face masks will soon be made mandatory. Visitors are no longer allowed. Family and friends are not allowed to visit. That has a huge impact on everyone. Emotional dramas take place. A family secretly rows over the ditch with an inflatable boat to be able to be with their mother. Face-time calling is introduced. I take hundreds of pictures to show the family that they are doing well. Convinced that being outside is the best remedy, I walk for hours with the residents through the paradise garden, which seems more beautiful than ever. The sky is clear blue, there is no noise, no planes.”

Ilona Senghore graduated in 1989 as Monumental Designer at the Royal Academy of Art in The Hague. In addition to being active as an artist, she teaches painting and has been working since 1995 as a well-being counselor in a nursing home. Ilona makes symbolic drawings, paintings and socially critical ceramics. She draws associatively to understand everyday life, which puzzles her often. From random lines and shapes, a story unfolds that becomes known during the drawing, or even the day after.

Thus the trace appears in her work, the symbol of time. The train comes roaring unstoppably. The trumpet with its bell is the attention that is demanded. The animals can be themselves, but more often symbolize human actions. The water and the sea is the subconscious, a movement and the source from which it all begins.

The Corona outbreak was only a few months through when metastatic tumors were discovered in Paul Donker Duyvis body. Immediately three muses took care of him and became Angels, Caregivers and Comforters. Donker Duyvis decided to use the illness as a vehicle for a staggering, undisguised and moving series of self-portraits, which portray the comforting and warm contact with the three women.

The understanding treating physicians quickly turned to life-prolonging treatments: radiation, hormone injection and chemotherapy, but they are all physical treatments. Psychological help was also offered, but much more important than words was the indispensable touch – which produced an immediate comforting and magical effect.

The touch, the skin, the direct contact, the production of Oxytocin (known as the cuddle hormone) is an neglected part of medical and terminal care in the eyes of the photographer, who is seriously ill. The moving series of straight black and white self-images Corona Cancer Comfort 2021 is a plea for the return of the loving, healing touch, which was missed by many during the Corona pandemic.

Rosh Abdelfatah is a Kurdish-Syrian artist, filmmaker, artistic director of the Arab Film Festival Rotterdam, who graduated at the St. Joost Academy in Breda, 2006. Currently he makes freelance productions for different Arabic TV stations and works as an independent artist in Netherlands and Middle East.

“As an individual you hardly have any control over the environment. Reality forms while you look at it helplessly. As an artist and filmmaker I search for images where I can get a grip of time. In my work I look for moments of support. They are anchors in a deteriorating, changing environment. The search for what is in disappearance forms visual benchmarks that, if well done, can convey both pain and comfort.” – Rosh Abdelfatah

Rodi Khalil was born in Tal Hedat, Syria, studied art and design at the University of Damascus. He worked as an stage designer at the Theatre of Damascus, as well as in different TV films broadcast in Syria. He has exhibited his paintings and sculptures in London, Rotterdam, Beirut, Turkey, Spain, New York, Sweden and Germany. In Germany he was also involved in set design and became a member of the National Association of Artists (BBK Bremen) and the International Association of Art (IGBK, IAA, AIAP).

“I come from a land of myths and repression. For me these myths are building a connection to the present. They offer topics which are fascinating and ageless. I want to build a bridge from past to present for all those people who are open or can be interested for that. My images are showing elements of manifold cultures: those of the Assyric, Meder, Marer, which I am a child of.“ – Rodi Khalil

Hard Times is a Dutch edition of the international project Onder de Kerktoren / Under the Tower (underthechurchtower.org). The project links a range of artists, curators and locations so far in Belgium, the Netherlands and Palestine, as a response to the Corona times and the lockdown.

‘Onder de kerktoren’ (‘under the church tower’) is a typical Flemish expression that means “small-scale” or “navel-gazing”. Universality and open-mindedness sit at the opposite end of the spectrum. These two extremes are diametrically opposed to one another. The concepts of local and global have a new ring to them. Western European citizens have experienced the reality of lockdowns for the first time since the Second World War. We were confronted, quite literally, with the perspective of our current location. How do we see things from such a position? Is there a difference between the digital and the physical experience?