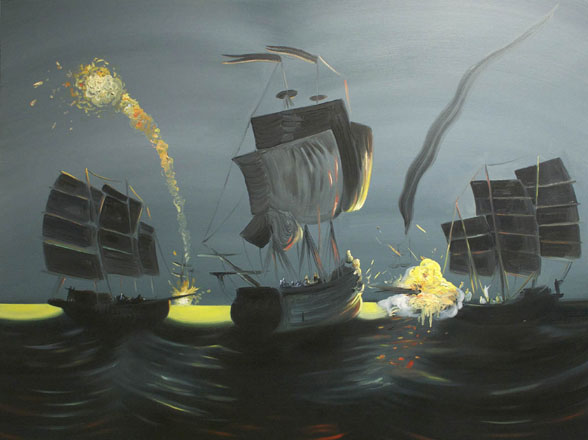 Painting remains a dynamic medium to this day. After post-modernism it seems to have limitless possibilities of subject and style. Some painters, however, dedicate themselves to a single subject which they choose to study meticulously. Gallery Maurits van de Laar shows the work of three generations of contemporary Dutch painters devoted to such a practice: Rens Krikhaar (1982), Philip Akkerman (1957) Erik Pape (1942). The paintings were exhibited at Quartair and the drawings and works on paper were shown at the gallery Maurits van de Laar (Herderstraat 6, The Hague)

The senior painter in the exhibition is Erik Pape (b. 1942) who, ever since the start of his long career, has been fascinated by the city of Paris. His first subjects were the Canal St. Martin and the round basins in the Tuileries gardens, rendered in an atmospheric, almost abstract manner. After this he started to paint bold images of Notre Dame, Gare du Nord train station, Sacré Coeur church and metro stations. Gradually, his paintings become more subdued and Erik Pape began to single one particular subject: the Place de la Bataille de Stalingrad. In the area of this busy square, the metro runs above ground over a viaduct supported by cast iron columns. At first, Erik Pape rendered the area explicitly. Soon, the images became more internalized, showing only the outlines of the columns and archers of the square and seizing the atmosphere and dynamics of area.

Philip Akkerman (b. 1957) is a phenomenon in contemporary Dutch painting. He has been exclusively painting his own face since 1981. To do so he uses a wide range of styles and techniques. Like the old Masters he starts with a drawing transferred onto panel with an oil sketch and then elaborated upon. The portraits vary in style and colour and range from the subdued and realistic to the exuberant and grotesque. One self portrait bears piercing eyes, another a top hat or other accessory. Yet another features a distorted face. At times boldly coloured at others almost dissolved thanks to the fluid brushstrokes that are continued in the background. By strictly holding onto the concept of self portraiture his work also documents time. Each painting shows the face of the artist at the moment of painting and therefore illustrates the passing of time.

Rens Krikhaar (1982), the youngest painter, is highly interested in the tradition of both western and Asian art. About a year ago he took to the subject of seventeenth- and eighteenth-century seascapes. This also lead him to spend time studying maritime history bringing famous admirals such as Michiel de Ruyter and notorious raiders like Simon the Dancer come to life. From this historic perspective he revives the tradition of maritime painting. His small paintings often show a delicate image in which the ships are rendered in only a few brushstrokes. The bigger paintings are more detailed and have dramatic light contrasts with sometimes violent images of fire and explosions, and men of war.